Re-thinking losers and winners in the War of 1812

by Jamie Swift
Those of us who have criticized the Harper government’s love-in with the War of 1812 have become accustomed to accusations of being spoil sports. “What’s wrong with celebrating Canadian history?"

Well, nothing at all. But let’s take a broad look at that handful of inconclusive skirmishes marked, as they were, by equal measures of human suffering and military incompetence. Instead of the official prattle about how the war determined “which flag we salute” (Stephen Harper) and “paved the way for Confederation” (Toronto Sun), let’s get beyond the age-regression fantasies of re-enactors who get dressed up to play soldier as they try to recreate Lundy’s Lane or Chrysler’s Farm.

Tom Korski put it well in a recent Hill Times article. “Any true 1812 recreation would require that actors be 5’3’, with smallpox scars and bad teeth, forced to gum half-cooked cornmeal, sleep in the mud and die of gangrene.”

War is a tawdry, grotesque enterprise all too often cloaked in patriotic garb – an effort as old as it is predictable.  History – and the history of war – is contested terrain. One of the oldest clichés in the book is that history is written by the victors.  So Ottawa’s $18 million effort entails selling the War of 1812 as a birth-of-a-nation story. But it might also be described as a death of a nation….or many nations.

That’s because a truly conclusive outcome was that First Nations on both sides of the border between the American republic and the outpost of empire that was Upper Canada were the true losers in the war. The British Empire, a ruthless and cynical an enterprise as ever existed, double-crossed their crucial allies. Although Tecumseh is celebrated as a hero, a harsh fact remains. After 1814, with the Treaty of Ghent in which the British betrayed the native claims, First Nations came to be treated as “Wards of the State.” Their dream of a native-controlled polity at the heart of North America – which the British had tentatively supported, was gone.

This reality is not, of course, part of the Official Story. 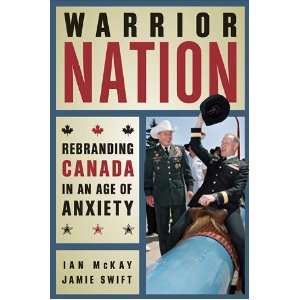 One group of winners in the war was Upper Canada’s arch-reactionary Family Compact. If we want to celebrate history, why not focus on Bishop John Strachan and the rest of the men whose malignant rule congealed in the aftermath of the Treaty of Ghent? These politicians were oligarchs to the core.  Strachan certainly didn’t suffer from any problems with self-esteem, writing his autobiography at the age of twenty-one. And the Anglican prelate  was  most concerned that the virus of democracy would creep north, contaminating the yeomen farmers of Upper Canada with subversive notions that he called “licentious liberty.”

Like the government of Stephen Harper, Bishop Strachan had a fierce loyalty to the monarchy. And, like the Harperites, he had his own version of the War of 1812 and its history that he zealously put about. According to Strachan, it was the sturdy colonial militia – those same yeomen farmers -- who saved us from the Americans. This “militia myth,” widely rubbished by historians, was nevertheless deployed by the powerful cleric in an attempt to turn the brutal little war into a noble, nation-building enterprise. Strachan did his best to downplay the highly trained British regulars and their aboriginal guerilla allies who did so much to hold off the Americans.