A new documentary about the ravages of the War of 1812 in south-western Ontario is being developed. It will include the 1813 battle at Moraviantown (near Chatham), where so many Mennonites and Brethren in Christ suffered great losses. They had been helping with the retreat of supplies and refugees (technically: internally displaced persons) from the fortified locations near Detroit..

This is a key element of my ongoing research, in which I'm trying to determine the nature and extent of Mennonite and Brethren in Christ involvement in this transport operation. The film looks at the ugly devastation of war and also the inglorious acts of treason that were committed by many Canadian residents at that time, who seemed prepared to see victory go to the Americans.

“A Desert Between Us and Them: Raiders, Traitors and Refugees in the War of 1812”

By the way, they're still looking for actors, horses and wagons. Preferably, although not necessarily, the actors might also be horse-riding and wagoneering Mennonites and Brethren in Christ!?

Posted by Jonathan Seiling at 11:27 No comments:

Email ThisBlogThis!Share to TwitterShare to FacebookShare to Pinterest
Labels: peace churches, war of 1812

The topic of Mennonites and Six Nations is not a new one. It's an uncomfortable one in some ways. Mennonites are implicated in the broken relationships that developed during the period following the early 1800s migration to the Waterloo region in particular.

To my knowledge there has been little systematic study of the interactions and relationships between various First Nations groups and Mennonites during the War of 1812. What I've found in my research indicates that some Mennonites had startlingly amicable relations with First Nations while some others were thornier. There are some fantastic tales and some embarrassing ones, for those us of who identify with Mennonite heritage and are prepared to recognize the benefits we derived from an unequal relationship between our ancestors and First Nations.

At the Grand River Heritage workshop (I referred to in a previous blog) the key highlight for me was Rick Hill, a First Nations historian. He spoke of a message of peace and socio-political separatism from the imperial societies in which First Nations lived.
Read more »
Posted by Jonathan Seiling at 13:53 No comments:

Email ThisBlogThis!Share to TwitterShare to FacebookShare to Pinterest
Labels: Mennonites, peace, war of 1812

Last Friday (Feb 17) I participated as a speaker at the Grand River Heritage Workshop, an annual event focusing on some aspect of – believe it or not – the heritage of the Grand River! The War of 1812 was the focus and I was extremely under-aged for this particular event, unlike the other heritage events I've know that were teeming with hipsters. I was surprised I didn't get carded.

To my surprise, however, it was CUTTING EDGE. Seriously. It wasn't a splash of Loyalist-leaning propaganda, awash with valiant war memories, or an undercurrent of nostalgia for a supposedly buff military, but it was largely geared toward acknowledging the pain and devastation of war. It acknowledged that loyalty was not something taken for granted. It should not have been a surprise to me since the Grand River watershed saw little of war's glory. 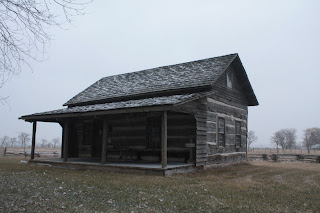 [photo of c.1790s cabin of Daniel and Elizabeth (Miller) Hoover near Rainham]


The theme was 'Divided Loyalties' and my presentation looked primarily at Mennonites and Brethren in Christ (very few Quakers lived within the watershed at that time). It was natural for me to deal with the theme of divided loyalties because Mennonites and Brethren seemed in many cases to have been all too ready to be of service to whichever side of the war came knocking.

Read more »
Posted by Jonathan Seiling at 08:12 No comments:

Email ThisBlogThis!Share to TwitterShare to FacebookShare to Pinterest
Labels: Brethren in Christ, Mennonites, war of 1812

I’ve borrowed my title from an article in the Globe and Mail by Jeremy Diamond and Davida Aronovitch (20/02/12). The article uses recent polls to contrast the attitudes in the United States and Canada about war, history and patriotism. The authors speak disparagingly about celebrating a brutal conflict. Instead they ask for an investigation into a historical event: what did it mean?

As a Mennonite Christian, I resonate with this. I’ve been very uncomfortable with any mention of celebration about the War of 1812, and since I live in Niagara, I’ve seen that word a lot in the past months. Two hundred years may sanitize the battlefields for most people, but the cost in human suffering was real on both sides.
I hope that the coming years will allow us to look at the significance of not just this war, but all wars. “War with the United States” rings so falsely now, since we are major allies; who knows whether in 200 years “War with Afghanistan” might also ring falsely.