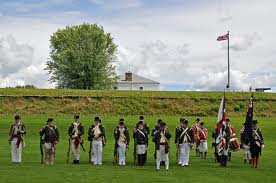 As a history buff -- and as someone who grew up near some of the old battlefields in the Niagara region -- I've read a lot about the origins, strategies, battles, heroes and outcomes of that conflict. But I can't recall ever hearing anything about the role of religion during the war. What impact did it have?
A big one, as it turns out, especially in the U.S.

In his book The Churches Militant: The War of 1812 and American Religion, William Gribbin noted the important role U.S. churches played in supporting the war. "The pious part of the nation turned with confidence to the task of combating international infidelity and domestic godlessness," he wrote.

Many preachers welcomed the war, urging their members to take up arms against Great Britain. "The Lord will plead our cause, and execute judgment for us," said one. "He will plead our cause in the highway of nations, on the banks of the Wabash, and before the walls of Quebec."
"Such a war God considers as his own cause, and to help in such a cause is to come to the help of the Lord," said another.

For one preacher, battling the British was almost as important as being a minister. Participation in the war, he said, "was second only to preaching the Gospel."

Although American churches were split along various theological lines, Gribbin writes many Christians were united in their hatred of Great Britain. "The heat and pressure of war fused religious sanction to national success," he stated, adding the War of 1812 contributed to America's ongoing sense of patriotism and divine purpose.

The war, he wrote, fuelled a "vision of the United States as a chosen nation with a special destiny to establish a secularized version of God's kingdom on Earth."

In Canada, Anglican Bishop John Strachan played a notable role in the conflict. Described by Pierre Berton, in his book, The Invasion of Canada, "as perhaps the most significant and influential Canadian of his time," Strachan used his pulpit and position to promote patriotism and support for the troops.

But not all churches were pro-war. Two of the groups opposed to the conflict were the Quakers and Mennonites on both sides of the border. Their peaceful witness in Canada is being marked this year by the 1812 Bicentennial Peace Committee, an Ontario organization that plans to hold events, post information on the web and place historical markers in the region about the role of peacemakers during the war.

One of the most interesting anti-war stories involved Duncan McColl, a Canadian Methodist minister in the Maritimes. When war was declared, McColl -- who had parishioners living on both sides of the border in New Brunswick and Maine -- called together the men from Canada and the U.S. in his parish and persuaded them to declare they wouldn't fight each other. According to one account, McColl said: "I've baptized you and married you. And I don't believe you want to fight each other." They agreed they did not.

Later, he personally confronted both American and British soldiers who came to the area, sending them elsewhere to do their fighting.

One consequence of the war was the disruption it caused within denominations that had members in both the U.S. and Canada. For Baptists in the Maritimes, the war severed a number of important cross-border relationships with their counterparts in the U.S. Once the war was over, the ties were immediately renewed.

The fighting also impacted Methodists in what is now Ontario. Not only did the war prevent itinerant Methodist preachers from visiting Methodist churches in Canada, it raised deep questions about how Canadian members of that denomination could support efforts to preserve their country, but at the same time preserve Christian unity with Methodists in the U.S.

In his bibliography of writing about Canadian churches and war, Gordon L. Heath of McMaster University notes "there is very limited research on the churches and the War of 1812." Maybe this anniversary is a good time to examine the role religion in Canada played in that war, and also in some of this county's other wars -- including recent ones like the first Gulf War and the war in Afghanistan.

For students and scholars, that field is wide open. According to Heath, nothing yet has been published about the role of religion in Canada in those two conflicts.

Email ThisBlogThis!Share to TwitterShare to FacebookShare to Pinterest
Labels: peace, religion, war of 1812

Thank you for commenting; your comment will be posted after it is moderated.